The first time I murdered you, you thought I was exotic.

You smiled and watched, even taking an interest in my work.

"Are you a serial killer?"

"No, you are the first," I answered, and turned my head to avoid watching the life rush from your body. But there had been something that you caught, a hint.

"Ah," you murmured, shaking your head and while a little smile wrinkled the corners of your eyes. "You lied to me."

It had been a lie, of sorts. Before I met you, there had been only practice. For weeks after your death, I lay in bed at night, staring at the ceiling, trying to determine what you saw. Even as I replayed each knot of the rope, each cut of the knife, I couldn't figure out how you knew about the other women.

It wasn't long before I ran into you again. You were a redhead, and you had a new accent, a bit southern or British; I couldn't tell, but I liked it.

This time, I placed you in a bathtub, and you immediately understood and approved. "Less clean-up. Wise decision. You're learning," you said.

I must have smiled a little bit, I don't remember, but you stroked my wrist with your thumb — it made me uncomfortable and aroused all at the same time. I dropped the knife and it clattered against the white porcelain of the tub, making an incredible racket that I was sure your neighbors would hear. You suppressed a giggle.

"When," you gasped, arching your back, "are you going to let me in?"

I thought about that giggle for years. I dreamed about it. I would practice it at home in front of the mirror, trying to duplicate it. Trying to understand what it meant and why it had such an effect on me. I needed to know more. I needed to change my tactic.

The next time you met me, I had decided to watch you in your own environment first, your apartment, to learn more about the giggle. You were shorter, almost pixyish. You had round, octopus eyes and you held yourself like you were being watched — coyly looking over one shoulder before closing the shower curtain, singing as you stretched in your pajamas. You were ready for me before I had arrived.

But we didn't meet yet. So I followed you to work, hid in the corner of the library with a book, and waited. I picked the same book each time but never looked at the title. It was a thick textbook and had a water drop on the cover. I decided that when you were ready, you would find me. And thirteen afternoons in, you did.

"Still reading that same book?" you asked. Your voice had an unfamiliar note. It told me I had failed.

I closed the book and blushed. "I'm a slow reader, I guess."

"Yeah, I guess." You sighed and collected the discarded books on the table and shoved them on your cart. One of the books fell off as you rounded the corner, and I rushed to pick it up. The book was tiny and old. It had a dark, dirty brown cover, and, imprinted in flecking gold, the title read, Permission. I ran after you, but I lost track of you in the stacks. I stuck the book in my pants and left.

I waited a year outside your apartment. You spent the entire time packing. At first, you were careful — wrapping up everything in newspaper, writing detailed notes on the outside of the boxes. But after too many afternoons caught up in the photo albums that you found in closets, or in reading books that you forgot you had, now you were just shoving things in boxes.

On your way down the stairs to the moving truck, you dropped a box. You stomped your foot and yelled a curse word. You bent over to pick up the random assortment of your life flung all over the sidewalk. I picked up a half-empty bottle of strawberry shampoo and handed it to you.

"Do you need some help?"

You sucked in a long breath. "No."

I grabbed your wrist, and you met my eyes, startled. You tried to yank away but stopped and handed me the box. We finished packing up your apartment and drove the yellow moving van to my place and unloaded it. The first night, we ate pizza from the place down the street and had imported beer.

After you threw the soggy cardboard pizza box in the dumpster outside and returned, you tied me to the bed and slept on the couch. In the morning, you made breakfast.

"Eggs?" You called from the living room.

You knew how I took my coffee from the contents of the refrigerator. The imprints from the ropes had faded by lunch, when you cooked us grilled cheese sandwiches.

Every night, we would end the same. Take out the trash. Tie me to the bed. Sometimes we'd sleep or read, but mostly you would talk. Sometimes you'd get passionate about a subject and pace or yell. If I thought you were being unreasonable, I'd laugh, and that irritated you. Three months later, I was in love with you. Or maybe I always was.

The last night, you took out the trash, and came back into the house. I grabbed your wrist and twisted it behind your back. I forced you to the bed and tied your hands. You struggled and cursed. You kicked hard against my shin, and I grabbed your head and pushed it into the mattress. I finished tying you to the bed and then slit your throat. I spent an hour stroking your hair as you bled into the mattress, and I talked about everything I knew about you and all the times we had met. The fear of rejection had kept me from telling you everything, but part of me knows that you understood even the feelings that were unspoken. This time felt different than all of our other times, all of our other encounters. There was a connection that I think you were waiting for, and I caught up to you. I finally understood that girlish giggle.

It's been sixteen months since that night, and I thought for a while that you might be avoiding me. Maybe I had moved too fast or things were becoming too intimate. Then I reasoned that a new relationship of this consequence takes time to digest. My chest tightened when I thought of that night, and I couldn't help but smile. It had rained, and the sky was now clear and cold. I caught the city bus and sat down in the front.

You were tall, very tall, with long, dark hair and skin so translucent that you could see the blue veins running through it. You were very curvy, big breasts and large hips. Your eyes were green and from the smile lines around your mouth, you were in your early forties.

I couldn't bring myself to turn around. I was too nervous or excited, but I could feel you staring at the back of my head and smiling just a little bit.

Each time the bus stopped, I glanced out the back door to see if you'd gotten off. I imagined pretending to run into you. Telling you how beautiful you look and how it's so nice to see you again, asking you if you wanted to have a slice of pizza together. Of course, the innuendo is there without being too obvious. You would coyly smile and laugh at the suggestion of pizza, but it would be there that you understood what I meant.

At my stop, I decided to get up and move to the seat next to you, but when I got up, you were in the aisle, leaving the bus. I followed quickly and ran to catch up with you. Through the park, the moon reflected off all the damp surfaces. There were no shadows, nowhere to hide.

I felt naked in the openness, and in a moment of self-consciousness, I let my eyes fall away from you, and you dissolved into the night. I stopped and listened for the click of your heels against the concrete or the sound of your breathing, but I could only hear the sounds of the water on the trees slipping off leaves and hitting the wet ground. I doubled back in circles until I couldn't hear anything but the heartbeat in my ears and my own loud, obvious breaths. My glasses fogged with perspiration and I took them off, but they slipped out of my hands and tumbled across the pavement. Your blurry figure appeared and bent down and picked them up. You moved slowly towards me and handed them to me.

"Thanks," I said, placing them back on the bridge of my nose.

"Do you need some help?"

Your skirt was hitched up as you pressed me against a tree. My mouth was on your neck and you moaned. I grabbed one of your wrists and held it behind your back. You unbuttoned my pants with the other hand and wrapped your legs around me. Your wetness enveloped me and our sweat shimmered in the moonlight. Before I came, I felt something cold against my belly. It startled me and I glanced down. Your hand held a knife. I suppressed a giggle.

"Are you a serial killer?" I asked.

"You're learning," you said and slipped the knife into my belly.

As I came and bled to death, I watched you walk away, and I knew you loved me, too.

Jessica Hilt is a graduate of the University of California San Diego and the Clarion Writers' Workshop. When she's not writing odd little stories, has a fabulous career as a tech socialite. This is her first piece of fiction to appear in print. Don't judge. She's not a psychopath. Really. 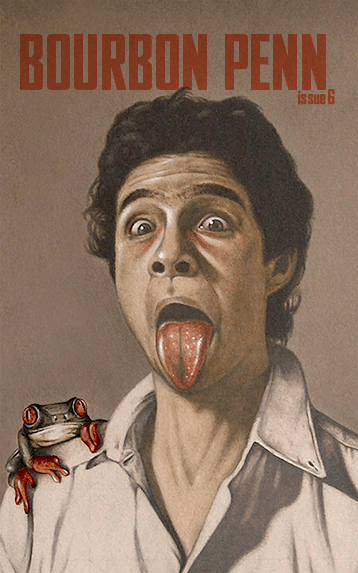 Are you a little odd?