A Blade of Love

Allan Thermoose's wife is in love with a blade of grass. It's the 375th blade, directly even with the crack in the third slab of sidewalk east of the mailbox. The blade gets full sun all day, and Allan, a stickler for lawn maintenance, is careful to water it, along with all the others, for approximately thirty minutes per day, moving the sprinkler three times to ensure even water distribution. He occasionally counts the residual droplets left on the tufts of grass fifteen minutes after he shuts off the water. If he's not happy with the results, he repeats the process until he's positive his lawn has had enough to drink. None of this is done for his wife.

Allan knows he shouldn't be worried about his wife's newfound love. He tells himself it can't last. It's just a blade of grass. It will probably die in the winter (although he hopes it comes back in the spring). Besides, it's not like she can get married to it, and the blade certainly can't provide for her. Every so often, Allan considers doing something particularly nice for his wife to compete with the piece of lawn, but then he reminds himself that he shouldn't need to compete for his own wife's love. The way he cares for the lawn should be enough.

The blade of grass is in the center of the lawn. It first caught Mrs. Thermoose's eye on a Tuesday when she was out getting the mail. There was an electric bill, two catalogs, and one of those things asking for money for kids with cleft lips. Although the pictures of those kids frightened her, she always ended up sending a check to them anyway. Maybe that's why she sent the check. As she walked back towards the house, she was positive that the grass winked at her. She hadn't been sure on the way out, but as she headed back, mail in hand, sundress lightly dangling off her soft frame, she was almost sure of it. Whether it was a wink or not, the look it gave her made her feel something that Allan hadn't made her feel in quite some time. Allan wouldn't have even noticed the type of dress she wore. The grass did.

She waited three weeks before telling Allan about her feelings. She did it right when he walked in the door from work, before he had the chance to put out the sprinklers for the day. Allan hadn't even set down his briefcase yet.

"I sit all day. Besides, it's time to water the grass," he responded.

"I'm in love with someone else," she said.

"Who?" he asked, while trying to decide if he should keep holding the briefcase. He did.

"I won't laugh. Tell me who it is." Allan set down the briefcase and thought about whether or not he should go to his wife. He didn't.

His initial reaction was to laugh, but something about the way she spoke told him that she was either serious or crazy. He had wondered why she was spending so much time outside. She used to hate the outdoors, but lately, it seemed like all she did was stand in the center of the lawn, staring at the ground. Allan never even thought to ask her what she was doing. It all made sense once she told him, at least to some extent. He wondered if he was to blame. Certainly it was his fault that the blade was so enticing, although he wasn't even sure at that point which blade it was. He couldn't think of anything he'd done to push her into such lunacy.

"Aren't you going to say anything?" she asked after a while.

"No you don't. It's Wednesday. You don't mow on Wednesday." She looked frightened at the thought of the lawn being mowed.

She watched from the window when he went out to water the grass. He eyed her occasionally as he walked around the lawn and deposited the sprinkler in all the usual places. He wondered if she was watching him or staring at her grass. While he was out there, he thought he saw a blade wink at him, but then he felt the breeze that must've caused it. "Why would any of the grass love her, anyway?" he asked out loud as he tried to figure out which one was the culprit.

It took quite a bit of time to figure out which one she loved. They all look the same to him, but that might be because he spends so much time making sure that each blade of grass is perfect. The only ones he ever notices are the inferior ones, which he pulls out almost immediately if they are standing alone. If they're grouped, he has a different approach that takes a great deal more time. There are no inferior ones around hers. Just a perfect plot of grass. He had to count out the blades at least a dozen times before he pinpointed her exact love. For some reason, she was reluctant at first to point it out to him. "You'll know it when you see it," she told him.

Allan stares at the lawn in a different way now. He used to admire it. Now, he is trying to figure it out. Of course, he still cares for it just as well. It gets as much water as it did before, and he cuts it on the same schedule. The only difference is how often he looks at it. Most days when he stands outside, a neighbor will stroll by and compliment him on such fine lawn care. They are always in awe that he doesn't pay anyone to treat it. Why would he pay when he can do it himself? Allan nods a thank you and goes back to looking at the grass. The neighbors think he is searching for imperfections and often tell him to relax. He doesn't tell them why he can't, so he chuckles an awkward chuckle and continues to study it. No matter how much he stares, he just can't figure out what she sees in that particular blade. After giving it a few dozen looks, he can't help but think it looks a little dull compared to some of its neighbors. He wonders why it isn't the 223rd blade just east of the center of the elm's trunk. Now that is a beautiful piece of grass.

Allan is under strict instructions not to cut his wife's blade of grass anymore. If he trims it even a centimeter, she's asking for a divorce—and she may even call the cops. He tells her he isn't going to mow that patch of grass, but this is not acceptable. Her blade must stand out above all others, so he has to trim all the grass around it by hand, making sure not to harm hers in any way. He asks if he can mark it somehow to be sure he doesn't accidentally cut it, possibly with a little paint, but she says no, the blade won't like that very much at all.

"Can I at least put a toothpick in the ground next to it?" he asks her. Even that is too much. She thinks it will hurt the roots. Allan understands her point and wishes he hadn't suggested such a thing in the first place.

She's taken to sleeping outside three days a week to be closer to her love. She snuggles with it and gives it kisses in the morning. She pretends the drops of dew are the blade kissing her back. Allan begs her to wait until after sundown to lie with the grass and to come back in before the sun comes up. She obeys his first request but not his second. Each of those mornings she comes in with damp garments and a bare shoulder. He's thinking of installing an automated sprinkler system that will douse her at four in the morning, but he wonders if maybe she wouldn't enjoy this a little too much.

It's late spring, and Allan wants to fertilize, but his wife says her blade doesn't want that. He insists it will help the grass grow to its fullest potential, but she, knowing nothing about lawn care, thinks applying any foreign substances will make it lose its sparkle. She's been keeping her makeup on at night and wearing lacey nightgowns to give herself a little extra sparkle. She only does this on the nights she spends outside, of course. When she stays inside with Allan she dons a baggy nightshirt and a bare face. Allan shrugs at bedtime each night and wonders why she ever bothers to stay in.

Her blade is now seven inches tall. City code requires lawns to be no longer than six inches, but the city isn't going to get involved over a single piece of too-long grass. Allan almost calls the city himself to report it but he doesn't want to pay the fine or waste the tax dollars on the investigation. The grass all around is only three inches. She is now insisting that the rest of the grass needs to be cut down to two inches. He thinks the single tall blade is unsightly and wishes his wife would forget about this crush. Two-inch grass is ugly anyway. Allan never did enjoy walking past those buzzed lawns.

His neighbors ask about the abnormally long bit of grass. He tells them he missed a spot. They ask if he's okay. He's never missed a spot before, and now he seems to miss the same spot every week. Allan can't tell them about his wife's feelings. They'll think she's insane, which means he's insane. Truth is, he's embarrassed about the whole thing. He'd rather his wife be in love with another man.


On Sunday, as usual, Allan mows the lawn. He likes to do the crisscross pattern, except around the trees, where he cuts a three-tiered circle. Of course, he leaves the small patch in the middle with that one, extra long blade. When he is finished mowing, he walks to the center of the yard with a small pair of scissors and trims each strand with barber-like precision to match the rest of the lawn. He contemplates cutting his wife's blade. He opens the scissors and slides them next to the single tall piece of grass. The scissors hover there, waiting to close on the blade towering over everything else. No one is around. He starts to push the metal blades together. They are mere centimeters away from each other when he hears the grass whisper, "I love her." He removes the scissors and tells it to treat her well. Then he goes and cleans the gutters. From the roof, he watches his wife go outside and sit with the grass. She looks happy, and he smiles as he removes a clump of leaves and tosses it to the ground below. He looks at the leaves longingly and wonders if any of them could fall in love with him. They just stare back, all crumply and dead.

Nathaniel Tower writes fiction, teaches English, and manages the online lit magazine Bartleby Snopes. His short fiction has appeared in over 100 online and print magazines and has been nominated for the Pushcart Prize. His story "The Oaten Hands" was named one of 190 notable stories by storySouth's Million Writers Award in 2009. His first novel, A Reason To Kill, was released in July 2011 through MuseItUp Publishing. His first novella, Hallways and Handguns, will be out this spring. Visit him at www.bartlebysnopes.com/ntower.htm 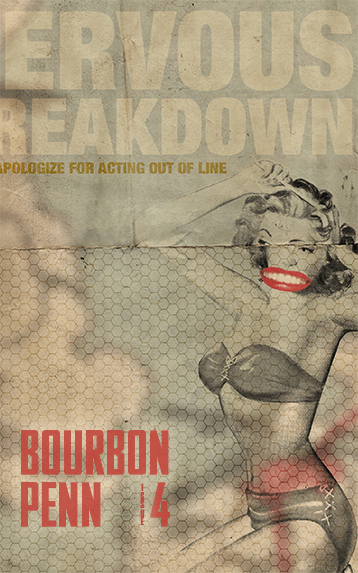 Are you a little odd?

A Blade of Love